On December 16th, the Bids and Awards Committee (BAC) of the Commission on Elections (Comelec) has declared the Smartmatic-Total Information Management Corporation to be the only eligible bidder for the procurement of Direct Recording Electronic (DRE) machines for the 2016 polls.

The Comelec wants to lease 410 touchscreen voting machines, which will be used during a pilot project to test this technology in the 2016 national elections. The bid includes 410 units of precinct-based direct recording electronic (DRE) technology voting machines, 410 ballot boxes, and technical support to be provided by 30 technicians in polling centers and 28 technicians for national technical support. 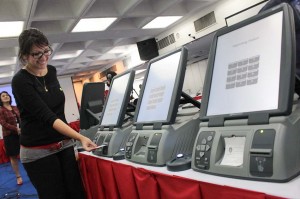 With a 3-2 vote, Smartmatic was the only bidder that satisfied the requirements for the Initial Technical Proposal and passed the first stage of the bidding for the lease of the voting machines.

BAC chair Helen Flores said “Smartmatic-TIM Corporation is, therefore, eligible to advance to the second stage of the competitive bidding for the lease of DRE technology.”

She also added that the five members of the BAC “unanimously” rejected the eligibility of the other service provider that was participating in the bid.