Democracy is crucial for the development of any nation. It is through democracy that the members of a society engage in the shaping of their shared future and determine the political, economic and cultural landscape of the country.

Although every nation has unique characteristics that condition how it should be governed, the United Nations (UN) has always promoted the collaboration among Governments to consolidate a set of minimum worldwide standards which can be applied to all nations.

Following that line of thought, and starting in 2007, the UN decided to celebrate the International Day of Democracy on September 15, as a means to encourage the creation of international programs that promote democracy. This year, the UN is focusing on the consolidation of a “Space for Civil Society”.

This theme suggests that democracy thrives when there is a strong civil society which can openly express and discuss ideas, and can also work with the State to guarantee a better future, based on common projects.

To help societies in such an important endeavor, Smartmatic developed election technology that allows voters to choose their leaders easily and transparently.

Throughout the years, it has successfully executed projects around the world that strengthen citizen participation. Just in 2015, it brought e-voting to countries such as Argentina and Chile, and guaranteed the right to identity for the citizens of Haiti, among many other relevant projects. 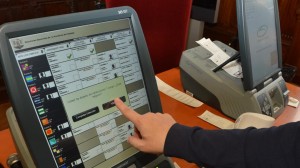 In the commune of Buin, Chile, Smartmatic provided an e-voting system during the seventh edition of the participative democracy initiative called “Yo opino”, which engages citizens in resource allocation and decision making.

Meanwhile in Argentina, during the most recent provincial elections held in Cordoba, it provided an e-voting solution to help citizens of La Falda and Márcos Juárez cast their ballot. Election results were delivered a mere 45 minutes after the closing of the polls, a milestone in the country’s democratic history.

In Haiti, Smartmatic partnered with the National Identification Office to modernise the country’s civil registry and ID system. In doing so, it helped build a platform that will guarantee that citizens have easy access to an ID card, which in turn will give them access to basic rights such as voting and social assistance programs.

These are but a few examples in which Smartmatic has empowered societies and strengthened democracy through technology.