The National Election Committee (CNE) of Mozambique presented an electronic voting machine that could be used for future elections. However, it is not expected to be used in the general elections slated for October 15.

The CNE made it clear that the final decision rests in the hands of the country’s political parties. If they reach an agreement, the entire voting process could be automated, from registering voters all the way through to the elections themselves. 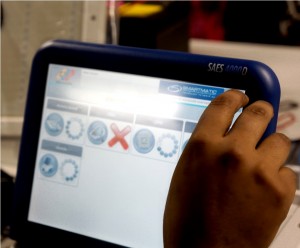 The authorities took into account the fact that the electronic voting machines offer a simple means of voting that is also affordable and efficient. No paper ballot would be needed.

The process of voting, which essentially consists of pressing a button for the preferred candidate, is easy even for illiterate voters, which means the process is more inclusive. The machines could be operated with batteries that provide more than 12 hours of uninterrupted voting.

After taking out the batteries, the information remains stored in the machine’s memory. This is important for votes from areas that are rural or difficult to access. The fact that it does not use paper means that ballot stuffing would not be possible. This system also makes it impossible to vote for more than one candidate, which would make the number of invalid votes fall dramatically.

The computer program resides in a tamperproof integrated circuit that is completely sealed and impossible to access.

Because the machines do the counting, the mathematical errors that were a common problem in Mozambique elections in the past will be eliminated. As an added benefit, the results of the vote will be released immediately after the polls are closed.