Citizens living abroad, with the legal right to vote in their countries of origin, need (and deserve) as much confidence in the protection of their voting rights as local residents.

Currently, and according to information from the International IDEA Handbook[1] and the ACE Project (Voting from abroad), most countries granting voting rights to their expatriates offer the possibility to cast ballots from at least one of the following methods: voting in person at a diplomatic or consular mission, voting by post, voting by proxy, and voting online (e-voting). 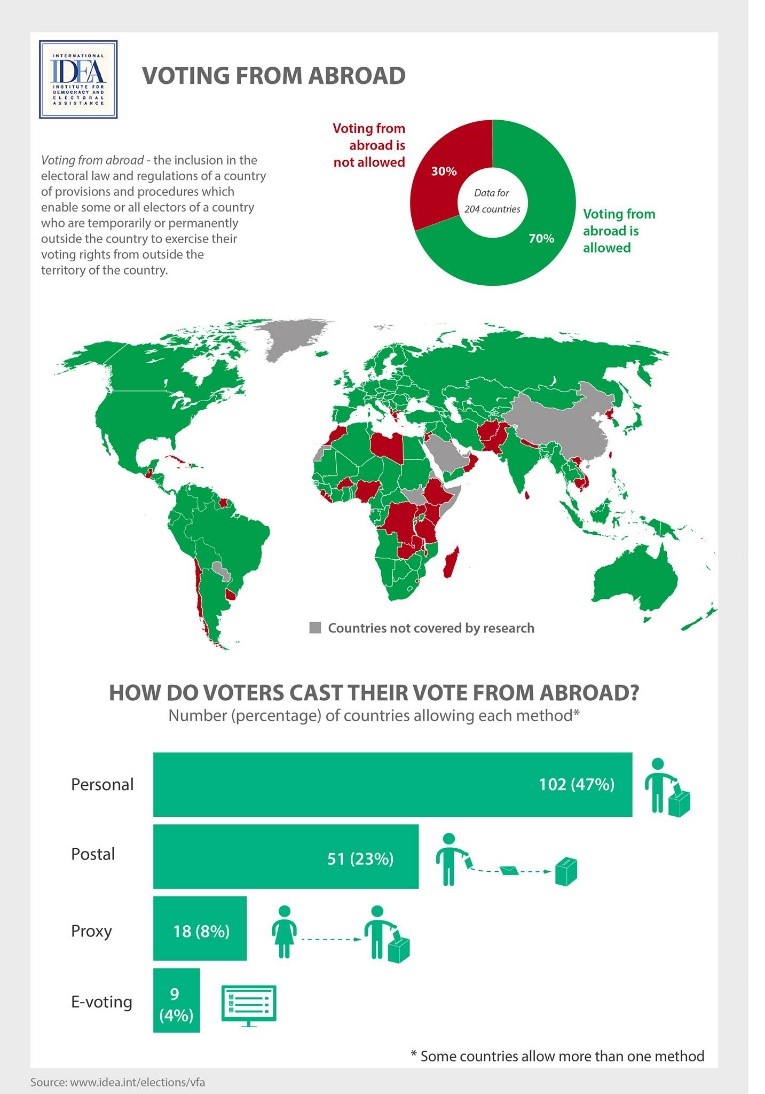 Voting from abroad is now possible for Diaspora communities from over 140 home countries. However, concerns over the secrecy, accessibility, speed of counting and security of external votes remain among emigrants.

Out of the available methods for voting abroad, remote e-voting has been considered by multiple countries (i.e. Armenia, Bhutan, Estonia, France, Mexico, The Netherlands, Panama, Switzerland) as an opportunity to try and test the introduction of a faster, easier and accessible voting system within a reduced population sample.

Of all these countries, Estonia has taken the lead.

Online voting has been available for Estonian citizens living abroad for the last ten years. For instance, evidence shows that roughly 90% of votes from abroad are now cast as e-votes. 5.71 per cent of all e-votes cast in the last Parliamentary elections of the Baltic state in 2015 were sent in by expats (from 116 countries). The number of e-votes from abroad were 10,022 (89%), in contrast, only 1,251 people voted at embassies/consulates or via post.

“Such numbers tell us that in Estonia traditional ways of voting from abroad have, thanks to e-voting, almost become a thing of the past. Given that more and more people travel, study and work in a foreign country, it is relevant to ensure that participation in elections is easy and sufficiently flexible for them, and e-voting seems to be a perfect tool for this,” stated authors Solvak and Vassil in their paper E-voting in Estonia: Technological Diffusion and Other Developments Over Ten Years.

In this European context, where 15 countries allow postal voting for their citizens abroad and 14 allow voting in embassies or consulates (and six allow both), Estonia and France stand out as the only two EU countries that currently allow online voting. Unfortunately, France has just dropped that option for its 2017 parliamentary elections in June due to ‘high risk of cyber-attacks’. Since 2012, the estimated 2 million French citizens living abroad had been allowed to vote electronically in legislative elections, but not in the presidential vote.

In times of expanding globalisation and multiculturalism, increasing migration rates and location independent businesses and entrepreneurs on the rise, the flexibility and easiness of time and geography independence while casting votes is one of the many benefits of voting online. Countries with large diaspora communities and committed to universal suffrage might consider e-voting as a growing political engagement and public participation tool for its citizens.

[1] As well as the study “The History and Politics of Diaspora Voting” prepared by Andy Sundberg, based on information from Andrew Ellis and The International IDEA Handbook, 2007.

The future of democracy depends on action and comm...
Coronavirus and the Future of Voting: Papa, I just...
What happens after you mark your ballot on Electio...
Digital Democracy Rising: A Decade of Automated El...
Los Angeles County will be a reference for the nex...
E-voting as a safety measure for expatriates: The Estonian case
Tweet
Share
Share
Pin
Tagged on: digital democracy    e-voting    Estonia    Online voting